Designer Jon Sibal posted this video on his Facebook page for Throwback Thursday. It’s footage of a young Keiichi Tsuchiya racing the Advan Porshce 964 Turbo in the Sugo round of the 1994 Japanese Grand Touring Championship (JGTC). There’s a pretty eclectic mix of cars on the starting grid including a Ferrari F40, R32 Skylines, Supras and RX-7’s. I believe Tsuchiya-san is racing with his mentor who eventually became his team principal at the ARTA NSX team.

This is an interesting video for a couple of reasons. The first part has to do with the NSX-GT FR. The story behind the car begins in 2007 when the sanctioning body of the Japanese Grand Touring Car Championship (JGTC) announced a regulation change that would require all of the GT500 class cars to be front engine with rear wheel drive (FR) layout. At the time, Honda was racing with the mid-engine NSX. The NSX was Honda’s halo performance car with the rest of their sports car lineup being front wheel drive. The NSX-GT FR was built by Honda R&D to see how feasible it would be to adapt the NSX chassis to a FR layout. That’s why the nose of the car in the video will look abnormally stretched and it’s cornering attitude will seem a bit odd compared to the rest of the NSX’s you’ve seen. Honda ultimately decided to develop a clean sheet design for an FR chassis, the HSV-010, specifically for competing in JGTC. The NSX-GT FR was thought to have been scrapped, but it turns out it was just put into storage at the Honda R&D facility after it was used for testing in 2007.

The second reason this video is interesting is the re-emergence of the NSX-GT FR. Honda surprised the Japanese press when they randomly showed up at the Twin Rings of Motegi circuit with the car in 2010. It turns out they were testing a Kinetic Energy Recovery System (KERS) by Zytek, the same company that makes the KERS system currently used in Formula 1 racing. Honda R&D was seeing if KERS would be feasible for widespread adoption in the JGTC series. The NSX-GT FR was a natural candidate since it was already available and it wouldn’t give Honda any extra testing time with the HSV that was still being campaigned. If you listen carefully, you can hear the KERS working under braking and the car rolling down pit lane in pure electric mode.

The video footage to accompany the pictures I posted earlier has hit YouTube courtesy of the Car@Nifty channel. There’s a few interesting things I picked up on while watching the video. First, the engine definitely sounds turbocharged. Second, the car is able to leave the pit garage in pure EV mode. Third, the mechanics torque both of the front wheels simultaneously by hand. The car isn’t front wheel drive like the street version of the CR-Z, but Honda has confirmed that the car is indeed a racing hybrid. I’m guessing there could be an electric motor on the front axle for regenerative braking purposes. I don’t think JGTC cars are allowed to be all wheel drive, so the electric motor would only work in one direction. If the car does have an electric motor on the front axle, its drive train will actually be very similar to the new NSX. 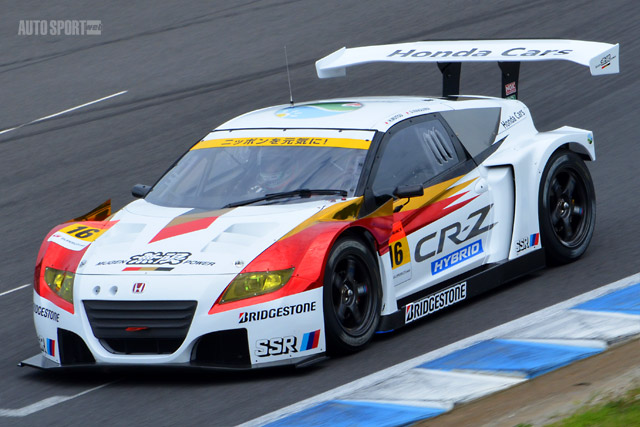 Jon Sibal posted these pictures of the Mugen CR-Z GT testing at Twin Ring Motegi. The car is slated to compete in the GT300 class of the Japanese Grand Touring Championship. The people who saw the car in person said the engine was relatively quiet, so it’s probably turbocharged. Honda has already stated that the CR-Z GT has a racing hybrid system. Honda likes to put their racing campaigns that use possibly risky drive train technology under the Mugen name in case they’re not as successful as they hoped it would be. The same thing happened with the Mugen Shinden electric motorcycle. Head over to Jon Sibal’s Blog to see the rest of the pictures. The CR-Z won’t be the only hybrid in the GT300 class. Toyota is also campaigning a Prius hybrid race car.